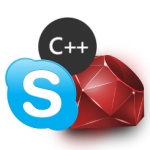 There are two methods to programmatically use Skype:

The first method is rather slow due to an interaction with the user interface. The second one is more interesting as there is no UI application.

SkypeKit SDK includes only wrappers for:

Is Ruby wrapper missed? No more!

On the way to gem

The goal of Libskypekit is to catch all asynchronous callbacks of SkypeKit C++ SDK and push them as events into a simple queue. Then synchronous application can pull this queue, retrieve each event and process it.

Libskypekit is rather a young library, but we have already implemented the next basic events:

It’s enough to write simple chat applications. If your are familiar with C language look at
ping_pong example

Plus the Skypekit Ruby library provides a simple interface. For example, look at ping_pong example:

I want try it

In order to play with SkypeKit gem you need:

Now you can play with it.

Libskypekit and Skypekit gem are both released under the MIT license.

But SkypeKit SDK is not!

There are a lot of restrictions!