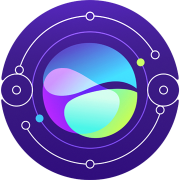 Machine Learning and AI have exploded in popularity over the last few years and every new startup wants to employ these techniques to disrupt traditional markets. Adding the word AI to a startup pitch can greatly improve the odds of getting funding.

The main goal of this article is to open a dialog and discuss the applicability of Machine Learning for solving real-world problems. First, we will describe different types of ML and its main principles. 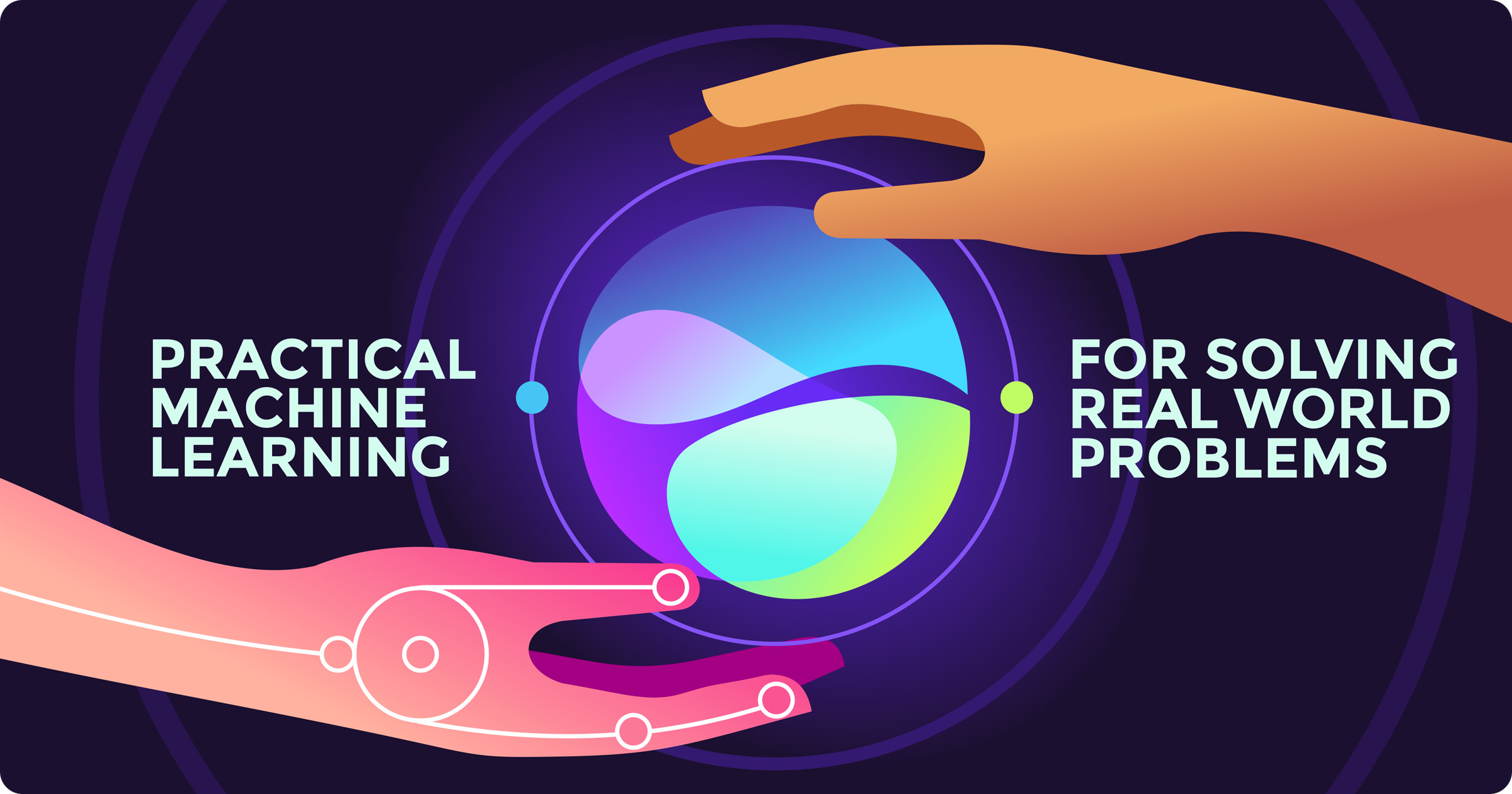 To get a better understanding of Machine Learning, let’s see how it differs from traditional programming.

First of all, ML is not a substitute for traditional programming, in other words, you can’t ask a data scientist to build a website using ML techniques.

Usually, ML and AI are supplementary to regular programming tools. For example, for a trading system, you could implement the forecasting part with Machine Learning, while the system interface, data visualization and so on will be implemented in a usual programming language(Ruby, Python, Java, etc).

The rule of thumb is: use Machine Learning when traditional programming methods can’t deal efficiently with the problem.

To clarify, let’s consider a classic ML task: currency exchange rate forecasting, and how it can be dealt with both techniques.

In traditional programming, an engineer has to devise an algorithm and write code to get a solution. Then we need to provide input parameters and the implemented algorithm will produce a result. 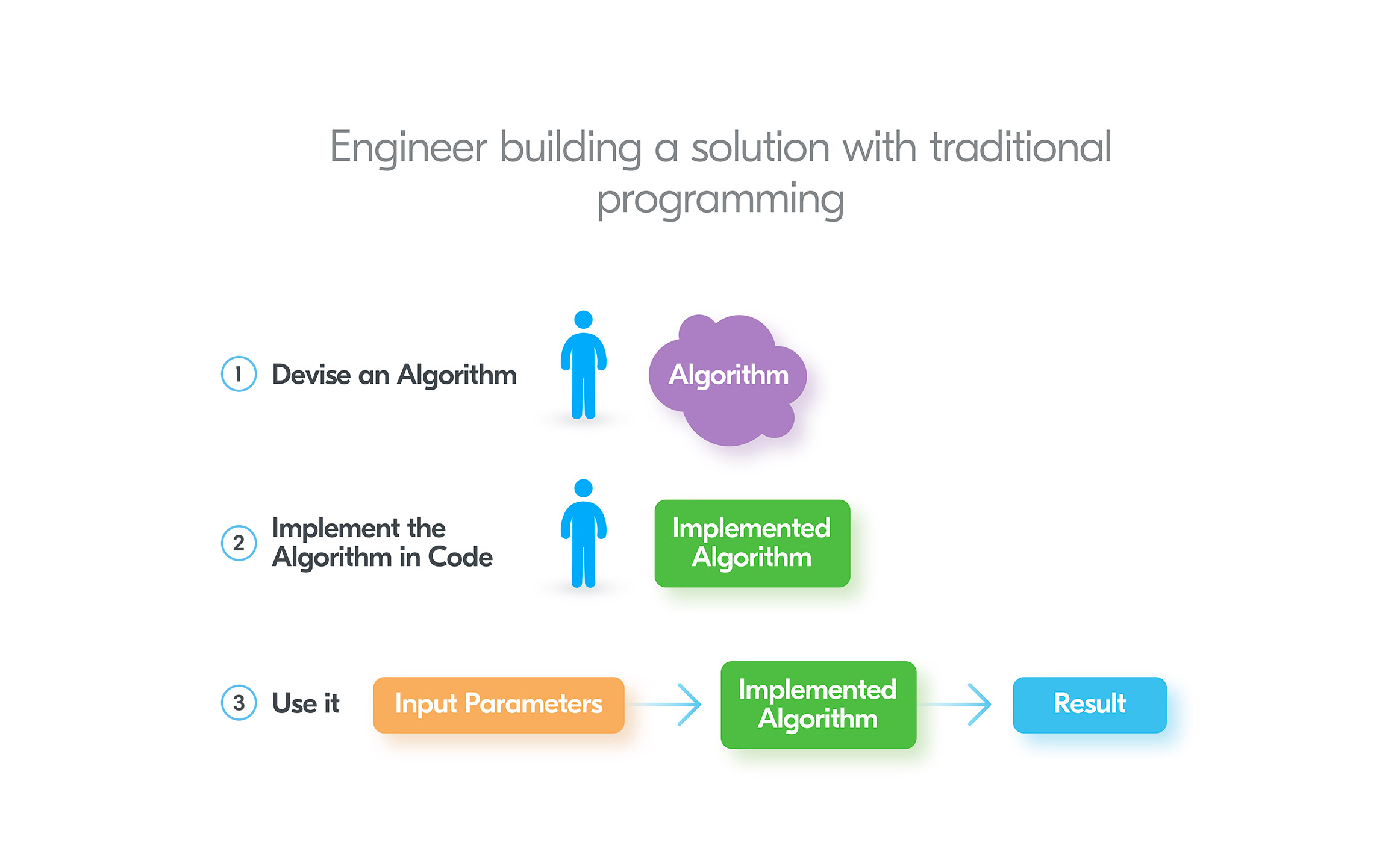 For currency exchange rate prediction, the algorithm can accept a bunch of parameters, like:

So, with traditional programming we create a solution, it can accept a set of parameters and predict a new exchange rate based on the input parameters.

When applying Machine Learning to the same problem, a data scientist takes a totally different approach. Instead of devising an algorithm himself, he needs to obtain some historical data which will be used for semi-automated model creation.

After obtaining a decent set of data, a data scientist feeds the data into various ML algorithms. The output of any ML algorithm is a model, which can predict new results. A data engineer can use different knobs to fine-tune the learning algorithm and obtain different models. The model which produces the best results is used in production.

The usage of the ready model is akin to what we have in the traditional programming solution. It gets input parameters and produces a result. The full flow is depicted below: 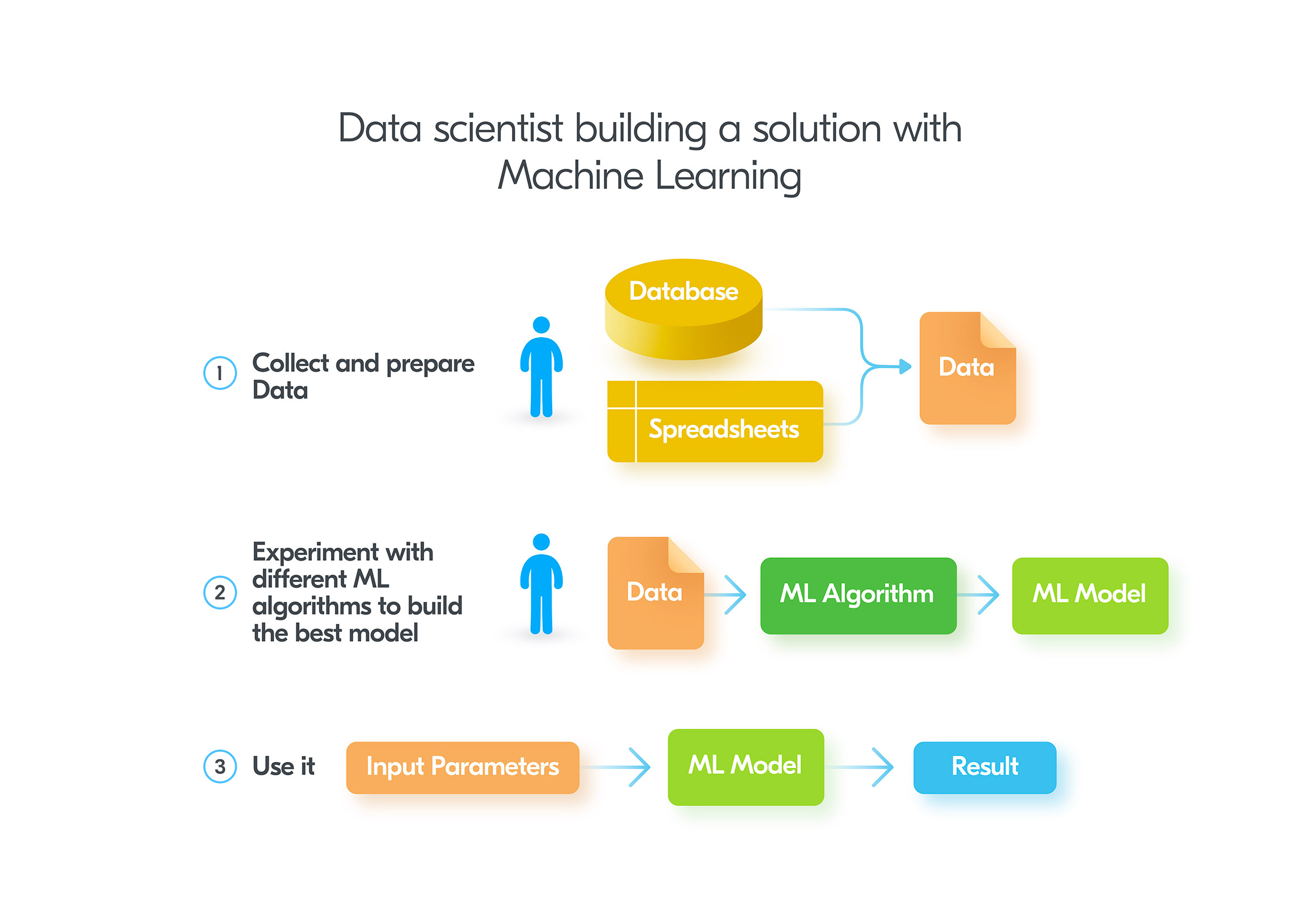 The noticeable difference between traditional programming and ML – is that in ML you don’t need to build the model by yourself. This task is mostly handled by ML algorithms with small tweaks to algorithm settings by the data scientist.

Another important difference is the number of input parameters a model can handle. To correctly predict the weather in a location, you could potentially need to enter thousands of input parameters, which can affect the prediction. It’s just impossible for a human engineer to build an algorithm which would reasonably use all of them. On the contrary, ML does not have these limitations. As soon as you have enough CPU and memory capacity, you can use as many input parameters as you wish.

Traditionally ML is separated into Supervised, Unsupervised, and Reinforcement Learning algorithms. Let’s discuss how they work and appropriate use cases.

Supervised ML is the most developed and popular branch of Machine Learning. The main idea of Supervised ML is that you provide a set of input parameters and the expected result. In this way you “teach” the ML algorithm with correct answers, thus the name “supervised”.

To use Supervised Learning your data needs to be “labeled”. That means along with input parameters, the data should contain answers or labels in ML terminology. For currency exchange prediction problem the label is the value of the currency exchange rate.

In other words, with Supervised ML we provide questions and answers to build a model. After the model is built, we can ask for answers to new questions.

Supervised Learning can deal with two kinds of problems:

Classification problems are very common in practice. Such algorithms provide an answer to the question of whether something is an instance of some limited set of answers or not. For example, we might have an image and need to “classify” an object on it. Does it have a cat? Does it have a dog? Or for medical diagnostics, the classification determines whether a patient has a certain disease or not.

The basic algorithm is the same. We need to have a set of images/texts/data and correct set of answers for each of them. The ML algorithm gets those questions and answers and produces a model. Later this trained model is used for making new guesses.

The usual restriction of classification algorithms is that they can provide an answer only to those instances they were trained for. For example, if you provided a lot of images with cats and “labeled” those images as having them, the final model will be able to detect cats on new images. But it will not be able to detect dogs.

This episode of “Silicon Valley” famously depicted the problem.

Classification algorithms work only when we have a limited set of possible results. But they can’t help when the output has to be a numerical value we are trying to predict.

So, from a high-level perspective, classification and regression analysis algorithms are very similar and differ only in the possible results they can produce.

The most common use-cases for regression analysis are:

Unsupervised Machine Learning tries to find hidden insights in raw, unlabelled data. In other words, we provide some data, but the data has no answers. This is why it’s called “unsupervised” – the unsupervised algorithm should figure something out without being trained like in Supervised Learning.

So, Unsupervised Learning does not train any model. Instead, it uses input data directly.

There are three categories of algorithms in Unsupervised ML:

Apriori algorithm is a very popular solution for associative problems. It allows you to find items which are most frequently used together. So, the usual functionality e.g “customers who bought this also bought that” can be implemented using some variation of this algorithm.

The image below provides a high level idea of what the algorithm does:

In general, we need to feed information about products into different baskets and Apriori algorithm will figure out the most frequent combinations of products.

This information is useful for retail stores to increase sales because it’s possible to place those items near each other or even create a bundle of such items with a discount.

Clustering algorithms allow you to group data into clusters. One of the most popular algorithms in this category is K-Means. The diagram below depicts the way it works:

The algorithm works in one stage. We just need to feed raw data into K-Means and it groups the data based on the parameters. While in our case it groups using two parameters, in practice there can be multidimensional parameter grouping.

Clustering has many simple applications in the real world:

In some complex ML problems, it’s easy to have hundreds of thousands of input parameters. Dealing with this amount of data can be a very CPU intensive task. Can we reduce the number of input parameters without a significant loss of original information?

Principal Component Analysis(PCA) algorithm deals exactly with this problem. The main idea behind the algorithm is shown in the image below:

In our example, PCA finds a way to project 2-dimensional data onto one dimension. So, instead of having two input parameters: “x” and “y”, it builds a new parameter “k” which is a projection from 2d to 1d.

There is also some data loss concerned with the transformation. On the left chart, it is easy to see that the dots do not lie perfectly on the k-axis. But on the right chart projected dots perfectly lie on k-axis.

In practice, PCA can do a 5x-10x compression if we have thousands of input parameters.

AI is often used as a buzzword in places where the speaker really means ML. But Reinforcement Learning (RL) is an exception. Because, most of the time RL deals exactly with AI goals – creating an agent which can make efficient actions in a provided environment. RL algorithms use reward as feedback to taken actions, and try to maximize it.

The rise of Reinforcement ML’s popularity began after the famous Go game match between Google’s AI – AlphaGo and human champion – Lee Sedol. AlphaGo was created using Reinforcement ML. Even the first version of the AI was a serious challenge for any human player. The next edition – AlphaZero reached a level of complexity unachievable for humans. The distinctive feature of AlphaZero is that it learned to play with itself, rather than use human parties for supervised learning.

Currently, the main research in RL is focused on building AI for different classic video games and making a machine figure out everything by itself. To put that another way, AI at first does not know anything about the game environment and knows only a few actions. It tries to apply those actions and obtain feedback from the game. This allows it to improve itself via the mechanism of reward/penalty. Each good action rewards the AI, each unsuccessful action penalizes it.

Along with computer games, RL is very popular for robot training. Though it has some success, the real issue for using RL in robotics is that real-world environments can be very complex and challenging to deal with. It’s usually possible to create a simulated version of an environment and use it for training AI. But when deploying it to a real robot, the trained AI can have a lot of issues due to the higher complexity of the real world.

In this article, we discussed three directions of ML: Supervised, Unsupervised, and Reinforcement Learning. All of them have some practical application in the real world and each has its own distinct features.

Supervised ML is currently the most evolved and practically applicable subset of ML. To put it in practice you need to have a task which can be formulated as a classification or regression analysis problem and a decent set of labeled data. There are dozens of ready to use classical ML algorithms and also Deep Learning algorithms to tackle more challenging stuff like image, text, and voice processing.

On the contrary, Unsupervised ML has much less applicability in production. While associative algorithms help in data analysis for retail and online stores, clustering and PCA are more applicable to support Supervised ML algorithms.

There is a lot of research in applying Neural Networks to recognize complex patterns in unlabelled data. Potentially they could lead to a real breakthrough when having only some arbitrary data, Unsupervised algorithms may be able to figure out some non-trivial dependency or even some kind of complex law.

Reinforcement Learning is very promising for problems where only humans can be efficient. Currently, most of the research is focused around teaching AI to play different kinds of games. But the main obstacle to applying RL in practice is the high complexity of real-world environments.

This article is just a jumping-off point for our discussion about different types of Machine Learning. Our friends at Udemy have tons of resources on Machine Learning as well.

At Railsware, we aim to share our knowledge and expertise gained in different use cases of AI and ML development. In the next article, we will discuss in more detail the Supervised ML, its applicability to different business problems and prerequisites for using it on your own.