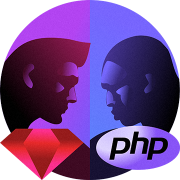 Ruby vs. PHP – in Quest of the Most Suitable Programming Language for Your Startup

Ruby vs. PHP is a comparison of two extremes: a bold underdog with Ruby on Rails as an ace in the hole and the most popular scripting language for the web. Which one is worth your attention when choosing a tech stack for a project? Find it out!

Both names are open-source scripting languages that are used for building web apps and general-purpose programming as well. They appeared in the middle of the 1990’s, and have common roots in the C language. But then their paths diverge.

We should say thank you to Yukihiro Matsumoto for the creation of Ruby. This object-oriented language co-opted the features of Eiffel, Ada, Lisp, Small talk, Perl and C of course. With Ruby, web engineers get clear syntax (akin to Python and Perl to some extent) and upturned productivity. Its guiding principle is that you can go different ways to do the same thing. Usability is one of the arguments for why Ruby is better than PHP. Code written in this language is not only elegant and expressive but also highly usable, which clears away any confusion for users.

Interest in this technology picked up with the release of Ruby on Rails in 2005. Nevertheless, it still lags far behind PHP. Among the apps built with RoR are Kickstarter, Airbnb, and many others.

This flexible and pragmatic solution for building web apps was created by Rasmus Lerdorf. The original acronym denoted Personal Home Page. However, now it refers to Hypertext Preprocessor. This server-side scripting language powers almost 80% of all websites including WhatsApp and Viber. Moreover, it also is the basis for renowned content management systems (CMS) like WordPress and Drupal. PHP allows you to create a range of web products from simple blogs to dynamic websites.

The technology offers a plethora of frameworks for use. Laravel is the most famous one, which we will take a look at a bit later.

Differences and similarities between Ruby and PHP

We should begin our journey with hands-on differences and similarities between the languages to get a clear understanding of when to choose Ruby or/vs. PHP for web development.

When we talk about Ruby vs. PHP usage, we should keep in mind that the language-based frameworks are no less important. For example, Ruby on Rails exceeds its underlying programming language in popularity which is evidenced by numerous articles on the web where RoR and PHP are compared. But that is like comparing a chicken soup with noodles. They are both edible but different in essence. For this reason, it makes more sense to compare Laravel vs. Rails – two great web development tools.

We’ll try to be unbiased, but Rails holds a special place in Railsware’s arsenal. This technology can boast numerous benefits including consistency, consolidation, scalability, security, and others. All these buzzwords mean that you spend less time and money on web app building compared to many other alternatives. Another salient benefit is startup-orientation. The framework can provide fast, efficient and quality outcomes through the so-called magic – Model-View-Controller (MVC) principle, the convention over configuration paradigm, test-driven development approach, etc. Also, Rails proved its suitability for building e-commerce products like Shopify.

It’s not a silver bullet that can be applied to any project. However, if you want to build a regular web app without any fixed concept (frequent changes are likely), RoR seems to be a perfect choice. Read more about why use Ruby on Rails for your product.

PHP offers a bunch of frameworks – CakePHP, CodeIgniter, Symfony, and so on. However, let’s focus on Laravel – a noteworthy competitor to Rails. This PHP framework is seven years younger than RoR. At the same time, they have many similarities like the MVC pattern, OOP support, DRY principle, and awesome community support. Most of the differences lie in syntax due to their origin. It is interesting that Laravel allows you to build almost any type of web app including password managers, social networks, e-commerce websites, etc.

This is just a short intro to Ruby on Rails vs. PHP Laravel. Truth be told, this topic deserves deeper attention. So, we hope to deal with it in some time. And now, let’s get back on track.

We’ve already mentioned that PHP beats Ruby in terms of market presence. According to W3Techs, Ruby with its 2.5% can only dream about PHP’s heights of 79%. SimilarTech claims that the number of websites built with PHP exceeds 7 million, while Ruby acting by Rails can has a bit less than 400K. PHP’s supremacy is also observed in different categories of web apps including people & society, shopping, entertainment, business, arts, and others. Ruby also lost in geographical coverage, where PHP has total prevalence in Russia and the USA ahead of the rest of the world.

It is remarkable that contrasted with a huge PHP dominance, the search interest in this technology has been nosediving in the last decade. One of the reasons is that PHP-based CMS like WordPress or Joomla have been losing their market share against the rising popularity of site builders like Wix.

Ruby, in turn, has not experienced any growth either. However, the search interest in this programming language has fallen only twofold.

When compared, we can see PHP’s nosedive and Ruby’s sea of tranquility on the chart. Can it be a sign of overthrow of throne holder? It’s not likely in the coming years, but the trends show that the landscape of technology presence will be changing.

This aspect is important for both developers and startup founders. If a language has a steep learning curve, understandability and clarity of the code will be high. And Ruby is the language that is known for its high-quality code. Hence, the answer to the question “Is Ruby or PHP easier to learn?” will be PHP. This technology requires less effort to master. Knowledge-seekers can check out our picks of best books, as well as online courses and tutorials to increase knowledge of Ruby and its framework.

Using Ruby vs. PHP benchmark tests, you can define which language provides the highest performance. The focus was made at two parameters – the average runtime and the number of code lines. PHP leads in the first parameter, while Ruby gives shorter code. So, we can state that we have no winner in PHP vs. Ruby performance.

Security is mostly related to frameworks and libraries. The language itself doesn’t have much to do with protection against different vulnerabilities including CSRF, XSS, and others. PHP is usually considered less secure than Ruby, which provides versatile robust tools to cope with common security vulnerabilities. With that in mind, we have a definite winner in the Ruby vs. PHP security comparison. However, that does not guarantee your code’s immunity to safety problems. Keep in mind that the safety of your web product is mostly defined by the way it is written.

The high popularity and low learning curve of PHP means there are more developers who know PHP than Ruby. That said, you’ll face more troubles in finding a decent Ruby rather than PHP engineer in many parts of the globe. In that sense, Rubyists are in a higher demand not only in the USA and Japan, where Ruby enjoys the highest popularity. The language has a constant flow of venture capital funded startups across the planet. On the other hand, one of the largest communities of engineers and a huge market share means there is a constant demand for PHP programmers.

Why choose Ruby or PHP

Each project has its own peculiarities and requirements that have to be considered when choosing a tech stack. We can’t just say “Do it with Ruby” or “Everybody does it with PHP, so you should too”. An ad hoc selection approach is what you need. And the following list of reasons should make the choice easier for you.

Reasons to opt for Ruby

It’s no wonder that we’ve placed Ruby on Rails as the key reason to opt for this language. If we take PHP, we’ll discover many frameworks to choose from, which may make a decision challenging. Ruby, in turn, does not limit itself to Rails. There are plenty of other frameworks including Sinatra, Padrino, Ruby Grape, etc. However, Rails is one of the major arguments for developers to love Ruby. With the framework, you can do a bunch of cool things automatically. In addition, it is startup-friendly, as evidenced by many famous names including Basecamp, Slideshare, Github, and many other Ruby on Rails websites. Fintech is another niche RoR gets along with. Learn more about building fintech startups with Rails.

The most popular Ruby-framework is not the only advantage. The syntax is what attracts many programmers to take Ruby’s side. Why learn PHP if you can get an elegant and readable syntax with Ruby and enjoy coding. Some say that a well-written Ruby code is like a book to read, and even non-engineer may get it. That sounds incredible, but it is Ruby. In practice, you get a maintenance-friendly product that was built rather fast.

This term among Rubyists denotes a software package containing a library or add-on. According to RubyGem statistics, more than 145K gems have been released so far. The purpose of each gem is rather simple – to accelerate and improve development. There is a high probability that the task you’re dealing with has been already solved by someone before. So, why do you need to reinvent the wheel if you can leverage a ready-for-use solution? By the way, PHP has a RubyGem alternative called Composer, where you can browse public software packages. PHP composer vs. Ruby gem is another topic to compare in detail but not here.

Reasons to opt for PHP

Unlike Ruby, which is known mostly for one framework, PHP offers numerous solutions to optimize your work. In addition to the abovementioned Laravel, you can enjoy the benefits of Zend, CakePHP, Symphony, Phalcon, Codeigniter, and many others. Each of them has its own ace in the hole represented by peculiar features and inbuilt functions like database connection, debugging, calendar integration, etc. PHP frameworks allow you to recycle code and automate some trivial tasks.

PHP is a good web app technology and one of the best for building e-commerce websites. Really, a huge ecosystem and specific capabilities of the language allow engineers to speed up time-to-market and do without huge budgets. In addition, PHP frameworks and off-the-shelf solutions contain integrated sales analytics tools to assist in running a business.

Similar to Ruby on Rails, PHP is a money-saving solution to build your project. Cost-efficiency starts from the very beginning when you don’t even spend a dime on subscription costs since the language is open-source. We’ve already gone through a comparison of developer Ruby vs. developer PHP, and you know that to find a PHPer is easier and cheaper. In any case, you can rely on C++ or Java engineers’ expertise since they won’t spend much time to get up to speed. Further on, you get an incredible assortment of tools including frameworks, editors, dependency managers, etcetera to optimize (i.e., reduce costs) the development. PHP saves both your time and money.

Now, it’s time to recap what we’ve learned about these two languages, let’s sum up some key takeaways.

In this article, you won’t find an answer to the question “Should I learn PHP or Ruby?” Both technologies are noteworthy and mature, and you will have to choose which language to leverage for your project needs. You can also check out some other comparison-based blog posts like Ruby vs. Java or Python vs. Ruby vs. Node.js to make a firm decision.